This is part two of the GR20 expedition in the summer of 2017. I would kindly advise you to read part one first unless already done so and you still need to wait a little for part three to be published. Is this finally the episode where the tingling sensation is upon us and we need to assume a brace position with our walking poles as an extra lightning rods? At least a proper storm was expected in the afternoon of day number three. Well beyond midnight, when I was answering the call of the nature the sky was still cloudless and littered with millions of stars. Night sky is always truly spectacular when hiking in the mountains. 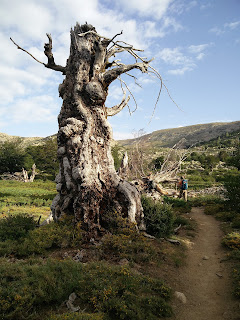 My enjoyable vacation day started at around 5 AM and we set out for a brisk little walk already at 5:45 in order to make it to the next gite d'etape before facing the possible storm. Our guide book was evolving to be particularly poetic describing the various sceneries we were travelling through.  "The air is fresh, tinged with the scent of alder and the fragrance of high mountains". I learned two new English words into my active vocabulary: runnels (narrow channels of water) and bucolic (relating to idyllic rural life).

The beginning of the day was quite easy hike across bucolic fields with grazing horses and little runnels leading from Lac de Nino. Only once we ascended from the freshly scented lake to a nearby ridge we started hearing the menacing sound of a thunder. There were some nasty looking clouds in the horizon and all of a sudden it was way too cold to sport t-shirts and shorts anymore. Walking on a ridge with drops on both sides is once again one of those places, where you probably should not end up loitering when there is a risk of a lighting strike. We chose to accelerate our pace.


Once we started properly descending from the very windy ridge line it was clear that the storm clouds stayed on the other side of the mountains. The trail crossed through a pine tree forest where we encountered a sounder (a special word for a group -- not in my active vocabulary) of feral pigs. Guide book mentioned that during GR20 it is possible to face wild boars (the ones Obelix eats), which might be even aggressive, but these animals looked like the typical domesticated pigs, but apparently living in the wild.

Given that we had started our day so early and also because the sound of thunder made our feet fly across the ridge, we were team number one to arrive at the pit stop for this leg of the race. This was one of those locations where we stayed in a hotel, an old now defunct downhill ski center, and our room was #101.

At this point the route started to take it's toll: knees were hurting, I had sun burn in my neck and wrists even with the sunscreen applied and my sturdy pencil-neck-geekish shoulders were aching because of carrying the backpack for three days straight. There were absolutely no possibilities for any star gazing this night as I was fast asleep already way before 10 PM.


A good night's sleep in a proper bed did wonders. From day number four onwards body seemingly started to be used to the stress it was being put through and hiking started to feel quite pleasant. One of the motivators for our expedition was one particular picture from a hiking blog that we had ventured upon when googling on information on GR20. There is a hiker enjoying clearly well earned skinny dip into a fresh mountain pool. One of the goals we had set for ourselves was to do a re-enactment ideally in the very same rock pool at our destination for day number 4: Bergerie de Vallone.

The day broke with dull clouds hovering over the mountains, but once we reached yet another windy ridge, the clouds gave away for impressive scenes all the way to Mediterranean in the distance and revealing majestic mountain peaks around us. We quickly refuelled with a cold Pietra beer in the highest located refuge (at 2000 m) called Ciottolu (can it be only a coincidence that it sounds a bit like Cthulhu?!). There are two peaks looming over Cthulhu's cabin: third highest Paglia Orba and Capu Tafunatu. The latter has quite an interesting hole pierced through the mountain and it looks a little bit like a massive eye that observes the hikers walking past.

After crossing Bocca di Foggiale and starting the descent towards Vallone, there are once again magnificent views far away across the valley floor below. Life was particularly peachy when inhaling the scenery, enjoying a baguette with Corsican cheese on top and getting rid of the boots (which started smelling a little bit like the cheese) and dropping the backpack even if only for a moment. As a special cherry on top, the internet reception was impeccable at our selected lunch spot. 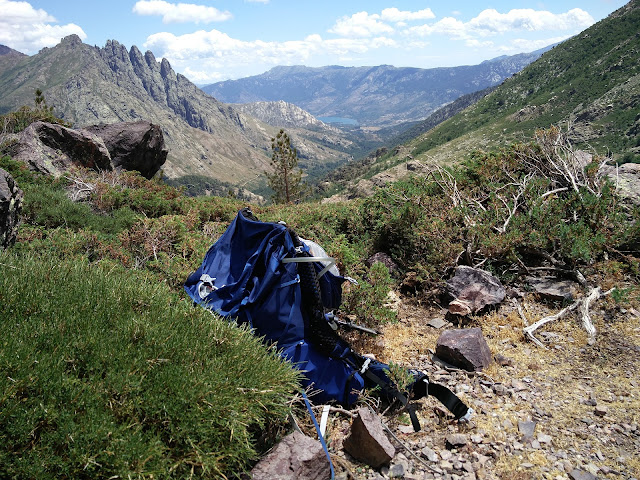 We set out to search for our earmarked rock pool immediately after having arrived at refuge Vallone. There is indeed a mountain stream nearby that gathers into numerous pools before tumbling further downstream into the valley. With a bit of perseverance we were indeed able to find the very same pool and complete a series of re-enactment poses sitting on the very same rock. Mission accomplished!


The only thing shadowing our enjoyment was rumoured possibility of a thunderstorm for the following day, which our guide book was specifically warning to be by far the lengthiest and the most difficult as it crosses on the shoulder of Monte Cinto, the highest peak in Corsica. This route was introduced in 2016 as the new official alpine part of GR20 after the dreaded Cirque de la Solitude section was closed due to a fatal accident in 2015. The guidebook was particular in warning not to attempt this section in poor weather which was apparently being predicted for the following day. During our lunch break we obviously hadn't used the internet connection to such trivialities as to study the weather forecast and the guardian of the refuge was merely shrugging his shoulders and repeating the word parapluie (an umbrella). A level of anxiety was evident in the camp as each party was wondering whether it is going to be safe to continue the next day.

Find out if I finally end up getting hit by a lightning in part three of my GR20 experience.