Instead of reading this three part blog entry, you may want to directly google the words "my holiday hell" and find relatively accurate description of just how enjoyable of an experience it is to hike through GR20-footpath across island of Corsica. I can only share half of the fun in my blog as we decided against the whole 180 kilometer coast to coast trek, but opted for the alpine northern half of what has been dubbed as the toughest trail in Europe. 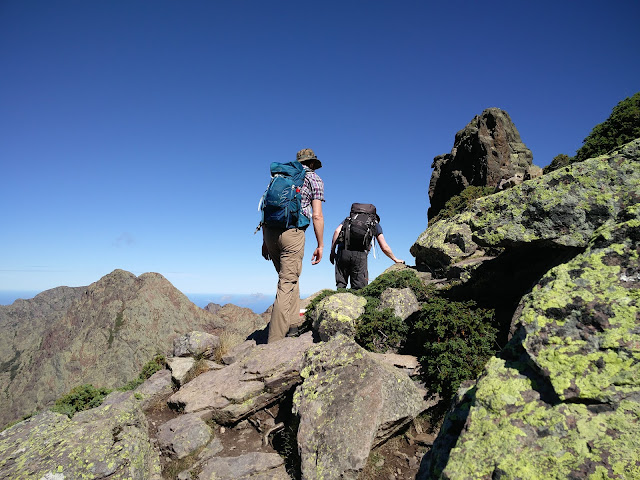 The decision to walk "only" 90 kilometers from Vizzavona (in the middle of the island) to Bonifatu at the northern border of the Corsica National Park was dictated by the finite number of available vacation days, but also by the desire to experience the more mountainous part of the trail. Don't tell anyone, but we also selected few additional alleviations: 1) we had prebooked accommodation in the refuges, so that we didn't have to carry our own tent, 2) in addition to breakfast and dinner at the camps we also got a little lunch box for each day, 3) we had access to our main luggage few times along the route and therefore we were able to optimize with carrying only the bare necessities and finally 4) we had an upgrade to a hotel room (!) for two nights during the 6 day hike. Therefore GR20 was going to be a walk in the (national) park for us, right? 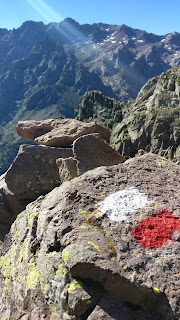 Me & my companions flew into Pisa, Italy, took a train to Livorno and from there a ferry to Bastia, Corsica. During the ferry ride we were comparing notes on what was possibly waiting for us on that maquis scented island. Possibility of facing a thunderstorm in one of the numerous mountain valleys was probably the top shared worry for us. I have once tried to outrun a lightning and I would prefer not to relive that experience again. According to ever trustworthy Internet, once a hiker feels a tingling sensation of a lightning targeting him/her, a crouching position should be quickly assumed. We decided to be extra alert to any tingling sensations throughout the trip.

Our dirty little secret of walking only a half of the true distance started to unfold on the very first day as we arrived with a train to Vizzavona. For most GR20 walkers whether north- or southbound this is the half way point of the journey. We failed to mimic the weary stride of the exhausted hikers, while we ventured out for a beer in our city clothes and enjoyed a steak in our accommodation. 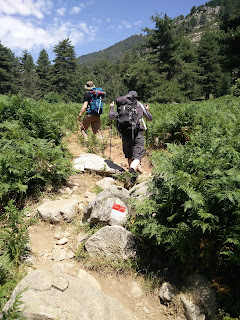 Given that we had chosen slightly different approach to the standard north to south trail, we took a variant route that feeds into the proper GR20 after a traveling a few hours through a forest and gecko infested rocky hills. We ended up bypassing L'Onda refuge completely and aimed directly at the refuge called Petra Piena.

Although it was a hot day the initial part of the walk felt relatively easy. We started questioning whether the route lives up to it's title. There are a number of water sources along the route where it is possible to fill in the water bottles, which were heavily being utilized under the scorching sun. Just to be safe during the first day we treated the water with purification tablets. The tablets apparently kill bacteria and viruses after first 30 minutes, but certain types of parasites can live up to 2 hours even after the tablet has been put into the water. I felt that even extra parasites would add to the total load I was carrying and therefore I was counting minutes before I felt safe to drink slightly weird tasting water. Weird water goes nicely with smelly chunk of Corsican cheese, which we had for lunch.
The final ascent to the Petra Piena camping site was relatively taxing and when the first tents appeared I was overly glad to get rid of my boots. Based on the managed expectations of facing very basic accommodation and food options, I was in fact positively surprised to find the huts and the provided tents in good condition. Food was indeed basic, but like they say: hunger is the best seasoning. It should be noted that in Petra Piena, like every other camp, there are (cold) showers, toilets and possibility to wash clothes. As mentioned my expectations were set low by the horror stories in the Internet.


GR20 is very well marked route. There are familiar red and white markers within regular intervals. They are so regular that the guidance is that if you don't spot the next marker in few minutes you are possibly off trail and should retrace your steps. We probably should have listened to this advice. We ended getting off track in a man height shrubbery early morning when leaving the camp. In fact we ended up misleading also a Belgian father-son combo and a French tourist group (or turrejuna as we were calling them) who were sheepishly following right in our footsteps.

After navigating through the shrubbery and cows (!) we reached the first proper col, which is the lowest point between two nearby mountain peaks. Only at this point we started to appreciate the fact that we were indeed in the mountains. There were absolutely beautiful scenery on both side of the ridge with a number of mountain lakes locked at the bottom of deep valleys.

During day 2 when we were walking from one col to another, from Breche de Capitello to Bocca a le Porte, we encountered the first steep scrambling with chains bolted into the rock. I still vividly remembered my chains of death experience in Slovakia and I was slightly concerned on how well I will be able to perform through this somewhat exposed section. It turned out that the scrambling wasn't really that difficult after all.


By the time we started seemingly never ending descent from the Bocca a le Porte, we unanimously understood what constituted to the label of the toughest route. Once again it was 1) hot, (by this time my sunblock started failing in my neck and wrists), during this leg of the trail there were 2) no possibilities to fill the water bottles, 3) there were hardly any level terrain to walk on, but rather it was either quite steep ascent or descent which started to take it's toll on our knees, 4) there is no or limited Internet connectivity for a nerd to enjoy life (!) and finally 5) there isn't much of a trail to begin with, it is mainly just jumping from a rock to the next at the risk of breaking ankles at every step. Another guiding principle for GR20 is that a hiker should stop before doing anything else than concentrating on walking. We did spot our first (but not last) helicopter rescue squad on day 2, so probably someone had made the amateur mistake of enjoying the scenery while walking at the same time.


"Life is good again", stated a fellow Belgian hiker once we finally reached the Manganu hut. Perhaps he had also heard that there is some possibility to get a few bits of internet traffic when standing on a special rock few hundred meters north west from the hut.

The story continues in part 2...