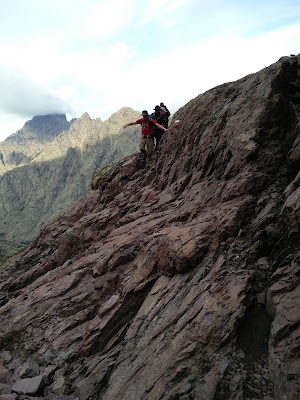 Australians to the rescue! I was struggling to explain in my broken French that we would appreciate to have at least some breakfast even before the sun is up, so that we could continue to enjoy rising very early during my holiday hell that they call GR20. It was in fact a team of father and two sons all the way from Australia who managed to get my point across to the guardian of the mountain hut that we didn't necessarily need warm milk in our morning coffee at 4:45 in the morning. This is part three of my blog series covering 6-day hike across Corsica.


Since we were walking opposite to standard GR20 direction, for us the high alpine section of the trip was on the penultimate day of our journey. The trail from the rock pools of Vallone ascent right next to shoulder of Monte Cinto, which is the highest mountain in Corsica at 2706 m, before descending into the valley below on a path covered in loose scree. Our guidebook was quite stern about the level of challenge for this leg of the trail. It was estimated that the walk may take up to 10 hours with about 1000 m ascent and 1200 m descent and warning that we shouldn't even try it in a bad weather.

One member of our fellowship had been quite concerned before the start of the trip regarding rumours that there can pretty nasty bed bug infestations in some of the mountain huts and the rented tents. Scared by this rather lovely video, he had stocked up with a serious insecticide called Permethrin. To add insult to the injury, he was eventually the only one of us whose succulent blood ended up getting sucked from all of the body parts which were not covered in the sleeping bag trenched in that agriculture-grade poison of his. Since he had opted to join the nightly international snoring competition he had the tent all for himself -- and for his little company of bed bugs.

Therefore with only cold milk in our cafe au lait (how barbaric!) and little less blood in our veins we set out for the most challenging day of the hike just when the first rays of sun started painting the mountain peaks with gold. There were no signs of rain clouds in the horizon. The seemingly never ending ascent from the hut to Bocca Cruccetta was quite taxing for me. I was getting dizzy either from the arduous exercise or from the smelly cheese we had received for lunch. My secret weapon were these convenient energy blocks. 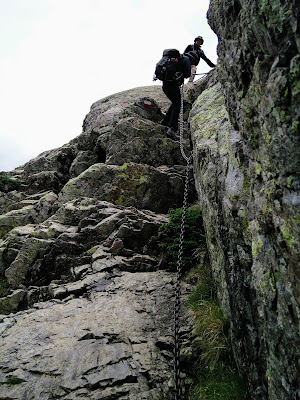 Finally at Pointe des Eboulis we were at the highest point on our hike at 2607 m and it was time to start heading down. While our guide book had been in a cheery poetic mood when describing the bucolic (in active vocabulary now, I told you!) pastures on day number 3, at this point the narrator had run out of creative juices. "Continue downhill following the trail" -- this was the only thing mentioned for the next 3,5 hour descent. The few sequences which required scrambling sometimes with bolted chains, were not overly tricky to negotiate. The way down was again rather spectacular. Little human felt particularly small against the massive backdrop of mountains all around us.

Eventually we made it safe and sound to Haut Asco. I can attest that this part would have been particularly miserable in a bad weather. There is indeed loose scree and those scrambling bits would have turned out to be quite dangerous when wet. There would not have been any place to look for shelter if the weather would have turned sour. The expected thunderstorm came upon us only in the evening when we were already enjoying our dinner indoors – and didn't have to take out our parapluis. I can only imagine what it must feel like walking GR20 from North to South. During the first days there is constant ascent for more than 1k each day. Having the climactic alpine section towards the end of the hike felt more appropriate – at least as part of a beautiful story arc. 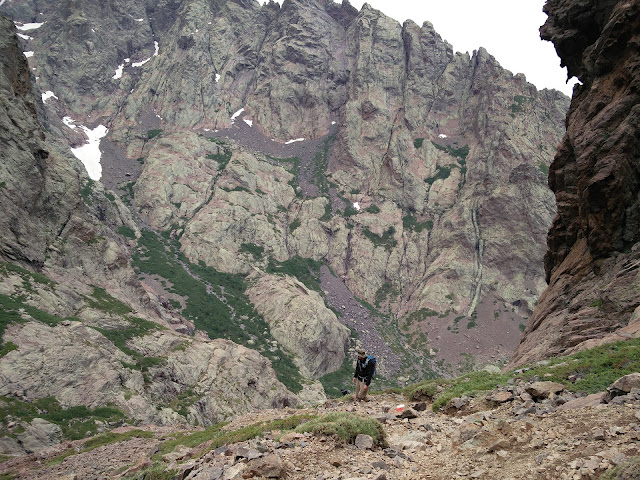 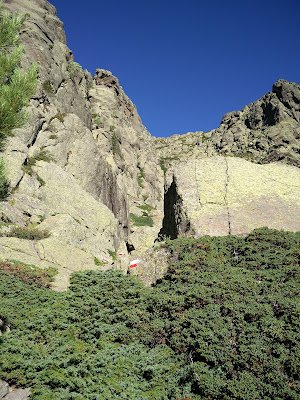 The precaution for our last day was not to underestimate the challenge. Having completed the previous days successfully – especially day number 5 – I think we ended up doing exactly that. There was still relatively onerous ascent and a long descent ahead of us. The weather was absolutely beautiful though.

With the first glimpse of the sea and the northern coast line from the top of the first ridge, we felt like we had our final goal directly in sight. This was merely a distraction as the trail zigzagged into yet another ridge before the final ascent from the mountains towards the sea began. There were once again few bits requiring some slightly exposed scrambling and once again I was thinking how very difficult these parts would be if it was raining.

The descent seemed to go on for ages. The scenery around us continued to be impressive. As an interesting observation by this point in time we realised that we all felt that we could continue like this forever. None of us had anymore any issues with our knees, backpacks didn't feel too heavy, sun had already burned few patches of my skin so it couldn't burn any more and so on. I have had some bad experiences with my knees dying on me (once in Borneo and before that in the Alps) and I was somewhat concerned prior to the trip that what if by day number 3 my knees stop serving me and turn against me. How am I going to keep on going for another 3 days then. However this risk never realized. Somehow the body was acclimatised to continuous walking even with little sleep, mediocre food and nasty bed bugs sucking our blood (at least for some of us).


The icy cold mountain water felt truly refreshing when we stopped for lunch and quick midday skinny dipping next to a suspension bridge across the mountain stream. There was clearly a sense of achievement in the air as we were getting closer and  closer to the end of the hike. Our customized hike did indeed come to an end in a small town of Bonifatu exactly at the border of Corsica National Park. The official GR20 would have continued slightly further down still to town of Calenzana, but for us this was The End.

Like when completing the hike I feel I don't want to stop here quite yet. Therefore I will write one more blog entry regarding GR20 where I will share detailed tracking data of our day trips (for all the statistic nerds out there), hopefully offer some valuable tips for folks possibly planning for GR20 and probably some further musings regarding the smelly island of Corsica.
Lähettänyt koomikko klo 11:56 PM