GR20 is a footpath that crosses the island of Corsica. It has been dubbed as the most challenging multi day hike in Europe. GR20 has secured its place high up on my bucket list of hikes. Back in 2015 me & group of my friends were eyeing keenly on the possibility to complete if not the full 15 day hike, but at least the reportedly more scenic northern half of the journey. This blog entry is NOT a narration of GR20. Instead of Corsica we went to Iceland!

Our fellowship got bit of shared set of cold feet (mainly due to onerous reputation of GR20) and unanimously decided that a trial run with a slightly shorter hike would be probably an appropriate first step. I have once before visited Iceland. The country captivates with its Moon-like scenery. It is otherworldly. The most famous hiking trail in Iceland passes through various different types of volcanic areas: from rainbow coloured mountains through snow fields, hot springs, icy cold rivers and eventually into a forest. The Laugavegur trail has it all -- including good opportunties to get a proper set of cold feet while crossing rivers.


We chose the clearly more common southward direction for the trail: it starts from Landmannalaugar and goes towards south eventually leading to glacial valley of Þórsmörk (that little weird looking character there in the beginning is essentially a Th-sound, therefore the name of place at the end of the hike is Thor’s wood in English). There are buses operating from Reykjavík to both locations, so it is very easy to get started on the hike.

What was not as easily arranged were the reservations at the mountain huts. Laugavegur is one of the most famous hikes in Iceland and during the limited season from late June to mid August there will be plenty of other hikers enjoying the rancid smell of volcanic gases. Therefore it is advisable to book the huts as early as possible. Obviously tenting is possible, but especially the first hut at the end of first day hike is pretty high up in the mountains and it can be quite cold outdoors due to wind factor. Guess which hut was fully booked during the week we were performing the hike? 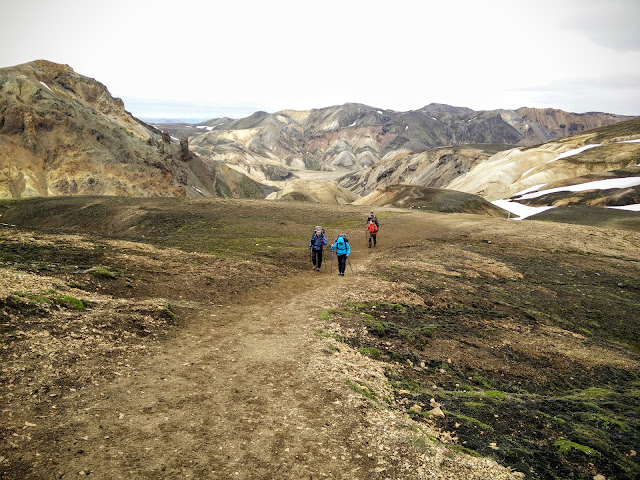 The trail starts from tent city of Landmannalaugar and quite quickly enters into colorful rhyolite mountains. Volcanic activity is apparent right from the start as there are hot pools around Landmannalaugar -- well then again the bus crosses over lava fields on the way to get there. The smell of rotten eggs intensifies during the day as more and more fumaroles open up both sides of the trail. 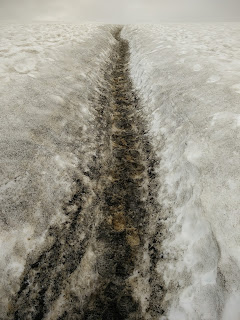 Seemingly the longest stretch during day 1 is spent on traversing snow covered side of a mountain. There is apparently snow throughout the year. Continuous uphill hike starts to become laborious especially when the fog sets in and it’s no longer possible to distinguish ground from sky. While the trail is clearly enough marked, there was a story being told of an Israeli hiker who got lost in a summer blizzard and succumbed just 1 kilometer before the Hrafntinnusker hut. With these cheery thoughts we pressed on already mentally trying to prepare what was bound to be one cold night up ahead. Even us Finns do not enjoy sleeping in the cold exposed to the elements.

Luck was eventually on our side. There had been some last minute cancellations and we did get ourselves into the warmth of the hut for the night!


With sympathy we looked at the fellow hikers freezing in their tents around the hut as we continued on the trail on the morning of day 2. The second day hike was more relaxed because we knew we had survived the coldest night. Also the trail was going more downhill than uphill. There were some impressive glaciers right next to the trail, but the most magnificient sight during this day was the first view into verdant Álftavatn valley from the rim of Jökultungur. The lake (Álftavatn itself) which was to be our destination for this leg of the hike was seen down in the valley. It looked relatively close, but still took quite a bit of treading. 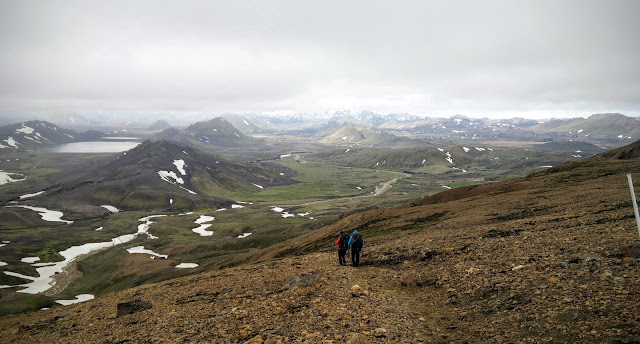 There was yet another pleasant surprise waiting for us at the hut right next to the lake. There is an infrequent bus connection to Reykjavík from the hut, which meant that we were able to send our camping gear to wait for us when we had finished the hike. Therefore our backpacks just became so much lighter for the remainder of the trek.

Given that the hike itself did not feel overly tedious, we decided to do a little side trip to the nearby mountain of Battháls (4,1 km - 1 hour 45 min). At the summit of the mountain there are interesting spires of lava protruding from the ground. I had invested into a Laugavegur hiking guide book which had been written by a volcanologist and therefore I was able to shine with my recently acquired body of knowledge on the different viscosities of magma and varieties of gobs of molten lava.

The enjoyment of lifting half empty backpack in the morning of day 3 was quickly replaced by the fact that we had to do our first wading through an icy cold mountain stream. The sun was blessing our first fording of the first river. It is a good idea to have a pair of “river shoes” given that the currents can be pretty strong and the river bed is uneven due to rounded, mobile pebbles. You probably prefer not to fall and not to have your backpack floating into North Atlantic. The water is cold. Truly cold. But not impassable. 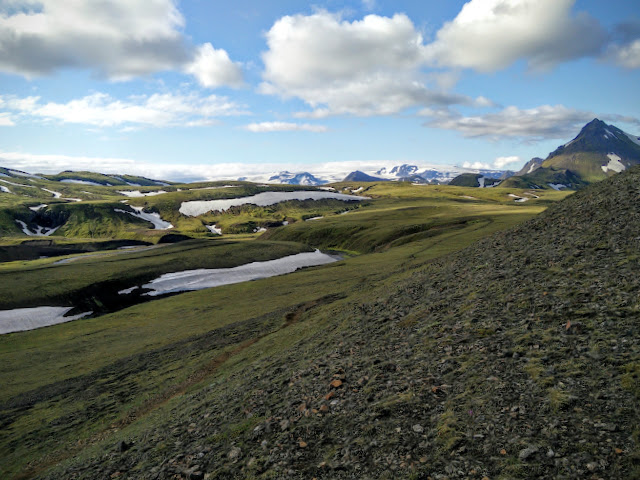 We had exceptionally nice weather during this leg of the journey as we crossed the valley surrounded by velvety green and black mountains around us. Geologically most interesting thing on day 3 was crossing a fairly empty desert littered with bombs, molten lava shot out of a vent. We kept wondering that if one of the surrounding volcanos decided to start bombarding the nearby area with bombs, there would be absolutely no place to hide. 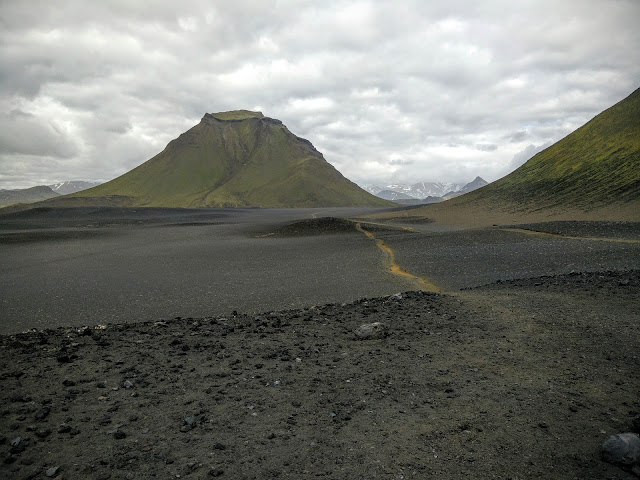 Once again the day hike was relatively easy, thus we decided to do an extra side trip after short stretching of legs at Emstrur-Botnar hut. There is an impressive canyon called Markarfljótgljúfur nearby (4,5 km - 2 hours) which is absolutely worth checking out. All the nearby streams that we also waded through feed into Markarfljót river and over time it has eaten its path through the layers of lava. The steep cliffs of the canyon are truly majestic against the backdrop of glacial mountains. 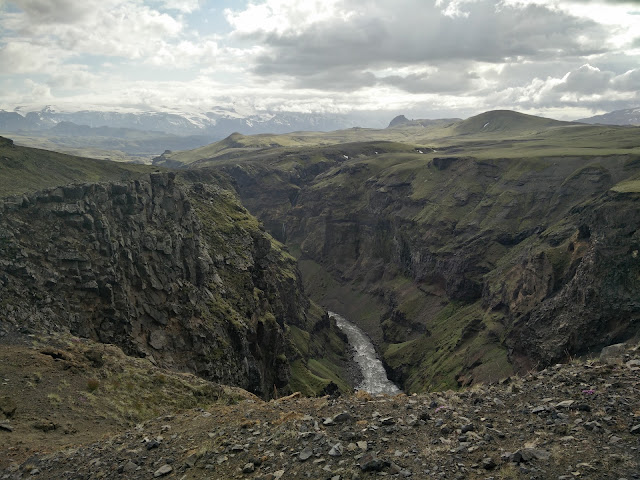 
The final hiking day is greeted with danger signs and evacuation protocols in case the nearby Katla volcano starts to erupt all of a sudden. Katla is one the most active volcanos in Iceland and it has erupted violently 20 times over the past 1000 years. Typically the eruptions happen within 40-80 year intervals. The last eruption was in 1918. You can do the math. Furthermore, history tells us that Katla typically has become active shortly after there has been an eruption at Eyjafjallajökull glacier, which happened in 2010 the last time. Remember the ash clouds over most of Europe?

The real danger here is that the trail descends into valleys and drainages which would be flash flooded by Jökullhaup when tons of ice from Mýrdalsjökull glacier were to be melted by the subglacial Katla. Suffice to say Katla decided not to erupt on us while we were at the bottom of the valley.
There is still one more river, rather strong at that, to wade through before emerging into the forest. By this time we felt we were already masters at crossing cold rivers. According to my guide book, hikers are supposed to yell “mörk!” in celebration for seeing the first trees during the trip. We all bellowed obediently. Apparently other hikers did not have the same guide book.

Having reached the end of the trail at the Húsadalur, we rewarded ourselves with a pint of Gull and a decent meal in the restaurant before taking the bus back to civilization.


Extra curriculum activities while in Iceland


A brief mention is in order to recommend warmly (pun intended) the hot pools in Reykjadalur area. The site requires bit of a hike uphill, but the secret of this particular place is that a river flowing from the mountains joins various hot pools during its way down. Therefore you can optimize your perfect spot by changing your place in the river. The stream is hotter uphill and gradually gets cooler downhill. An awesome experience.

Another recommendation worthy of a tip is to go out to see puffins and other seabirds in their natural habitat at Látrabjarg bird cliff in the Westfjords of Iceland. There are scenic steep cliffs up to 440 meters descending directly into the sea.

Honorable mention also goes out to a possibility of witnessing a pair of ever stylish Nábrók or Necropants at the Museum of Icelandic Sorcery and Witchcraft.

And finally we all enjoyed a day trip to Vidgelmir lava cave. I bet you didn’t know that “lava tube caves are formed when a low-viscosity lava flow develops a continuous and hard crust which then thickens and forms a roof above the molten lava stream.”

Perhaps we go to Corsica already next year!!