One of the hidden mountaineering gems within Europe is the High Tatras in Slovakia. I was lead on this little secret during one particularly warm summer night in charming Budapest, Hungary of all the places. I was trading hiking experiences with a Slovakian colleague of mine and during late night spur of enthusiasm I committed to one day come over and witness the mountains myself. I am so glad I lived true to my word on to what turned out to be one of the most memorable mountain hikes ever.

Tatras is a mountain range on the border of Poland and Slovakia and they are the highest mountain range as part of Carpathian Mountains which extend all the way to Romania. And true enough, after the Alps especially the High Tatras (Vysoké Tatry in Slovakian) is truly a spectacular mountain range, which I didn't even realize to exist before this trip.

First round of Wellness


There was a high possibility that I would never have seen the mountains -- at least not during this particular trip. The weather forecast was not promising particularly welcoming weather for us. There was a likelihood of thunder storms rolling in for Saturday, which wasn't something to look forward to while hiking in the narrow valleys between the peaks. However depending on the forecast source and the level of optimism applied interpreting the possibility of rain there was also a real chance for some splendid weather. Thus only at around 3 PM on Friday in the office my friend from work and her two friends finally agreed to give it a go.

It's a 3,5 hour drive from Bratislava to High Tatras. We were trying to ensure that we would make it to our first accommodation at Sliezky Dom before they would be closing their Wellness department -- essentially a spa with bubble baths, swimming pool and sauna. Most of the drive was spent on discussing either about Wellness or the possibility of rain. Or on the fact that it's mostly Czech tourists who get into accidents in Slovakian side of Tatras. 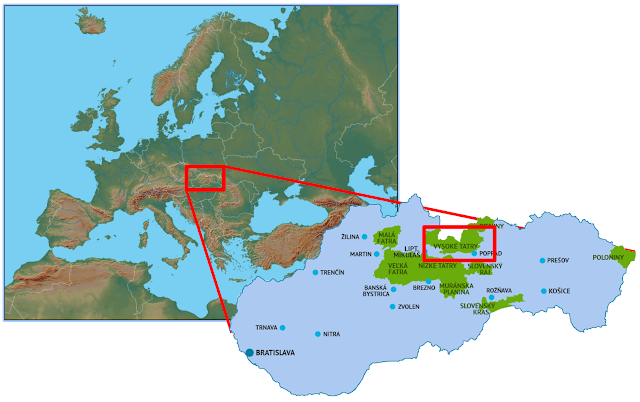 It turned out that the Wellness had indeed closed by the time we eventually got into the hotel which originated initially as a standard mountain hut. With a little bit of sweet convincing the staff was kind enough to allow us access nevertheless. A little did I know waking up on the day before in Finland that I would found myself soaking in a bubble bath with not one but three lovely Slovakian girls.

An additional round of sweet talking secured a beer supply even though the bar had been already closed. The bubble path experience was only surpassed by relaxing outside in the darkness, breathing chilly mountain air, marveling at the truly spectacular starry night sky with a beer in hand. I had a good feeling about this trip.

Through Thunder and Lightning


The optimist side won with the weather forecast. It was absolutely a lovely day to start hiking in the morning. We quickly ascended to the first pass between the mountain peaks and the hidden secret started to dawn on me. The views were spectacular. We quickly summited nearby Východná Vysoká (2429 m) and continued our journey. 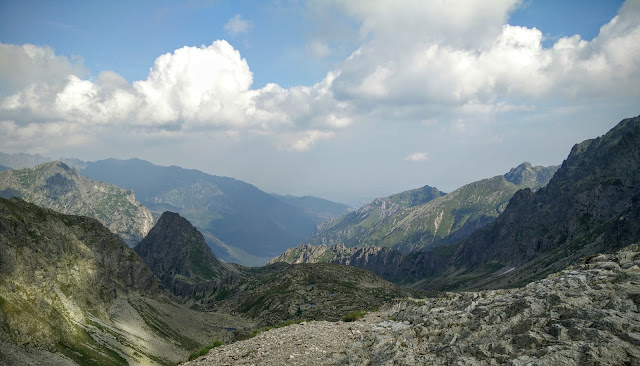 We traveled towards Zbojnicka chata, where we were planning on having lunch. There are some sequences in this leg of the hike with a slight exposure, but always with sturdy metal bars fixed into to the rock face to help with climbing. We even met an Irish bloke who was hiking with bare feet, so how hard can it be. Surprisingly it was not a Czech. While enjoying yet another round of goulash and beer on the terrace outside the hut, the weather forecast continued to warn that the sunshine still could turn into thunder showers in the afternoon. A local elderly hiker was sharing stories how he had once witnessed a man hit by a lightning in the mountains - with only a hole left in where the man's face had previously been.

The decision was eventually made to push our luck to reach the next hut where we would be sleeping. The distance between these two huts wasn't that much, but it does require a bit of scrambling both up and down in between. The downwards scrambling part was the true challenge for me during this hike. Once again there were metal bars with a chain attached throughout the whole length of the wall, but nevertheless steep vertical descent with a moderately heavy backpack was not fun. To add to the challenge I started hearing thunder rolling in into the valley when I was still clinging to my dear life on what I dubbed merrily as the Chains of Death.

The downpour started the minute I had managed to remember to start breathing again and realized that I was still alive after the descent from the pass. The fear of falling quickly dissolved into fear of getting hit by a lightning. The hut wasn't far anymore, but treading through the thunderstorm seemed like the longest stretch of the hike. The old man's guidance was to keep a distance to fellow hikers so that the lightning would only take one of us.

Completely soaked we made it to Teryho Chata. With no additional lightning holes in any of our heads, I might add. We had not been able to secure a bed at the overcrowded hut, but we were prepared roll our sleeping mats to the hut floor. There was a particularly fun staff operating the hut. After some halušky, maybe just a few rounds of beer supplemented by local herb liqueur called Tatranský čaj, which is originated at these mountains, we found ourselves continuing the party with the staff in the kitchen while the other hikers went to sleep. As it turned out, we were eventually kindly granted a bed at the Chatár's (hut warden's) own personal room. How lovely is that? 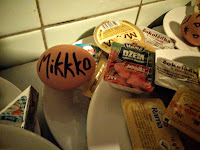 On the next morning the hike continued, but not before being served a special personalized egg! I felt overly bad for the staff who had to wake up early in the morning to make and serve breakfast after the late night party on the previous evening. We had ended up making some new friends, who had implied that there might be a yet another surprise waiting for us in the next hut.

We ventured downhill between the looming peaks of Lominický štít and Slavkovský štít. There was indeed a surprise in store for us. The key theme of wellness continued with us four being escorted into a hidden private sauna in the middle of the forest right next to a mountain stream with a waterfall. The stream turned out to be hideously cold (yet truly refreshing) and the self made sauna received a formal seal of approval from a Finn. Once again not exactly what I would have expected from this particular hike. Thus thoroughly pampered we made the final stretch to little picturesque town of Vysoké Tatry, where we took a train back to our car.

I have been quite torn on whether I should be contributing with this blog entry to leaking this secret. Let alone mentioning anything in public about the sleeping in Chatár's bed or bathing in a hidden sauna. This gem of a scenic mountain range with clearly marked routes and well equipped huts are so much enjoyable without hordes of tourists (Czech or otherwise) to be making traffic jams at the Chains of Death. Then again I stumbled upon this article published in US newspaper spilling almost all the secrets of the mountain to the masses of people. I guess the secret is already out.