Before, during and after ski

Allowing good ol' Isaac Newton to do all the work while sliding gently downhill from mountains with skiis is pretty much the exact opposite for hiking uphill with hurting knees. I recently visited the Alps for the first time ever during Winter and even if the lifts take me up the mountain and gravity takes me down, I have to admit that I was completely exhausted by evening time, so I would argue that also this trip warrants it's place in this hiking blog.

Me and my brother took a long weekend trip to Sankt Anton am Arlberg in Austria. We flew through Munich, but I wanted to ensure that we drove deep enough into the proper Alps to be surrounded by truly majestic mountains while skiing. It was pitch black when we arrived and the the only giveaway that we were heading for the mountains was the winding road. One of the first skiing centers along the way had lights on for their final slope into the village. At first sight the slope could have been mistaken as one of the so called mountains in Finland, but then we spotted faint lights of snow grooming machines further way up into the massive mountains. Clearly we were not in Finland anymore. 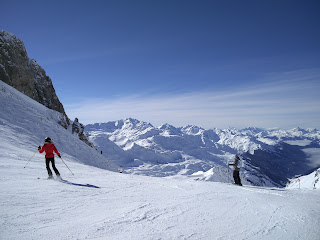 I'm glad that we did venture further into the Alps instead of stopping at the centers closer to Munich as the scenery around St. Anton is absolutely mesmerising. It was actually hard to concentrate on snowboarding on the first morning while I had to stop constantly just to let the spectacular mountain views sink in. Then again I didn't mind stopping into various open bars along the slopes.
The thing that blew me away (in addition to the scenery) was the length of the slopes. There was effectively 4-5 Finnish slopes back to back without a need to keep on churning the same slope back and forth. The slopes were not particularly steeper than what I have used to, but just covered much more distance. During the last day we travelled with the lift/skiing combo from the village of St. Anton to St. Christoph to Stuben and then back again for a total distance of 31 kilometers. Snowboard might not be the optimal weapon of choice always though as there are occasional flat stretches between slopes which require either dragging the board or relying on other people to drag you.


One thing that perplexes me is the integral connection of partying to this particular form of sport. First Aprés ski resorts are already midway in the mountains and start to fill up around 4 PM. By 5 PM in the afternoon during apparently any day the party looks like something that you would typically expect in a night club at 3 AM on a weekend -- except that people are still wearing all their ski gear. Luckily our hotel was one of those convenient ski in - ski out -type of places in the slope itself right next to what is easily the liveliest after ski bars in town. Thus we were able to walk back to our hotel room whereas others still had to somehow stumble into their skiis or snowboards for the final 500 meters into the village. Pretty scary sight, I can tell you!

One of my friends had visited the same region just a few weeks before and he shared a set of pro tips with me, which I'm happy to share with all of you now. Without somebody telling me, I would have never realized to pack my climbing shoes with me into a skiing trip. There is a decent climbing gym in town next to the railway station. The slopes are closed at 4.30 PM so there is time in the evenings to do other activities -- as if I would have had enough energy to climb after a day of skiing though. Another useful tip was to pack also my swimwear with me. There is a nice swimming hall with outdoor pools in town to help mend aching bones.
Lähettänyt koomikko klo 12:01 PM