Me & two of my mates were all expecting to have additional members joining our respective families around the same time in 2010. Given the upcoming miracle of triple birth, what would have been more appropriate than to arrange a pilgrimage to the famous distilleries on the Isle of Islay in Scotland. And to do some hiking on Isle of Skye while in the neighbourhood.

Stunnigly beautiful Isle of Skye is on the west coast of Scotland and is a part of Inner Hebrides. The pastures are velvety green with dramatic mountain scenery all over the island. I could so easily picture my White West Highland Terrier running through moorland covered with purple heather. We decided to do three different hikes during our short stay in Scotland. 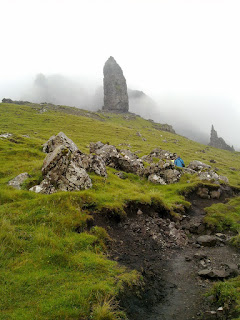 Among my companions there is a shared fascination with massive phallic rock pinnacles, so famous Old Man of Storr was clear starting place for the hikes. The Storr is a rocky hill on the Trotternish peninsula and the Old Man is one specific massive rock formation not far from the main road leading to picturesque Portree. The biggest town in whole Skye provided a good base of operations and an opportunity to get acquiented with enigmatic Talisker, Skye's response to peaty products of Islay.

The Old Man hike is very easy walk starting from parking place, doing a little roundabout around the Storr and coming back to the car. The weather in August was misty, which only added to the mystic atmosphere. Walkhighlands.co.uk provided good details and maps for all our hikes including the Old Man hike. By the way the Old Man himself has recently been made famous at least in the nerdy circles when being shown in Ridley Scott's Alien prequel Prometheus.

The Quiraing is a landslip further up north from the Storr area. Here we did similar few hour round trip around the Trotternish ridge. Once again very clear guidance for the route provided by the Walkhighlands website. This area has also been used as a location for a movie called Stardust, penned by one of my favourite authors of all time Neil Gaiman. I can easily relate to the fantasy setting of this area.

The third and final hike was slightly more onerous. Cuillin is the mountain ridge on the south end of Skye and is labeled as one of the most dramatic mountain scenery in the country according to ever trustworthy wikipedia. The Black Cuillin (as a distinction to less rugged hilly Red Cuillin) hosts 12 munros (Scottish mountains of 3000 feet (~914 meters for us scientifically literate) or above).

While the height of the mountain doesn't sound too intimidating, the rocky slopes are quite steep in places and Cuillins are regarded as some of the most challenging areas to hike in Skye. We set out to bag at least one of the munros while in Scotland. Squrr nan Eag seemed to be reasonably achievable target for us.

The route description talked about moderate scramble required, which didn't put us off. It also talked about impressive glaciated slabs, which might be somewhat challenging to negotiate. And challenging it proved out to be. For the first time ever during my hikes I went under an illogical spell of vertigo right between two of these slabs. For the world of it, I couldn't move forward or backward, but clung to strands of heather for my dear life. Now with hindsight, the bare slabs weren't even that steep, it was more the case of possibility of them being potentially slippery. Eventually a solution was offered to me by my companions who didn't seem to have any major trouble crossing the slabs. There was a small crevice under the rocky surface which could be crawled through to circumvent the slabby area. The catch though -- there is always a catch isn't there -- was that the crevice was filled with guano. So the price I had to pay was to crawl on all my fours on 10 centimeters of bat shit to get past the slabs. To add to the insult while I was knee deep in fudge nuggets, there was a family of two adults and two young children navigating a similar slab further down.

The promised moderate scrambling wasn't bad at all after the slab experience. We reached Coire Ghrunnda (little lake carved into the mountain most likely by same glacier which also polished the slabs below for me). At this point we lost final rays of sunshine which had been gracing us since the morning and heavy mist started to roll upon us. From the Coire there would have been still bit of a scrambling required to reach Sgurr nan Eag. We figured that we could still make our way up in the mist, but we might have hard time coming back down if the mist got any thicker. Thus we unianimously voted to make our way down and accepting the defeat in front of the munro this time. I think this is one of the most important lessons in hiking in the mountains: appreciating the fact that you still need to come down after reaching the summit.

Interestingly aforementioned Gaiman has a special connection to this part of Skye as well.  While Gaiman writes about a cave in the Black Mountains where you can find endless source of gold, I found a cave alright, but it was most certainly not gold what I had in my hands and knees when I resurfaced. On the way down we realised that there would have been a totally safe passage around the slabs slightly higher on the ridge.

Isle of Islay which is not far away from Skye did not win absolutely any mountains on the geo lottery. It is a barren windy island with peaty fields. I can understand perfectly well why people of Islay had to resort to other means of enjoyment instead of bagging munros.

We did not catch a glimpse of old Nessie even though we tried. I thought this would be an important piece of news to share in case you were wondering.

While enjoying haggis for breakfast in an utterly lovely B&B in Tarbert, our host and some other visitors were deeply engaged in a conversation with throroughly thick Scottish accent. Could not understand a word they were saying. Probably making fun of the smell of my hands and knees.
Lähettänyt koomikko klo 7:51 PM