All the way back in 2000 my then brand new hiking boots required to be broken in prior to putting them to a real test against Africa's highest mountain. Me & my travel companions decided to test a piece of Finland's most favourite hike, Karhunkierros, which was right around the neighbourhood -- at least when comparing to Tanzania.


Karhunkierros or the circle of bear is not necessarily aptly titled. The hike is not a circle at all but goes from point A to B (or to C if you opt for the longer version). If it is not a circle, then there are surely bears aren't there? The scenery at least is exactly the type that you could not be overly surprised if a bear did indeed cross paths with you.
Given the limited time of one weekend including the travel to and from forced us to take slightly different approach to standard hike. The full distance would have been 80 kilometers (95 km for the longer variant). We drove into the nature center within Oulanka national park, which is pretty much right in the middle of the hike. From there we hiked northwards crossing the polar circle and sleeping in one of the provided autiotupa (a basic unmanned hut, which required no prior reservation). From there we retraced our steps and ventured southwards from the nature center and camped out near to the ravine. Finally in the morning we backtracked the earlier route to our car.

Autumn colours put out nature's own fireworks display while we were there. As a special feature of the hike there are some quite impressive canyons (at least for Finnish standards), suspension bridges and the aforementioned ravine, Oulankajoki, which breaks into several köngäs. This regional term basically means a portion of the river with so steep declines that it cannot be canoed through. Essentially a waterfall in a river, but need to remind to put the falls into context of Finnish standards here as well. 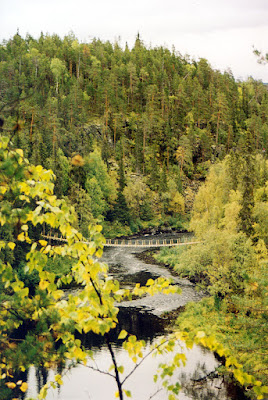 But all in all, very nice scenery. Making morning coffee on open fire on top of one of those canyons with forest blooming in red, orange and yellow all around you is still an experience I remember vividly after all these years. Unfortunately I also remember that my companion in charge of the food supplies had decided to bring only sausages with us. Sausages for breakfast, lunch and dinner.

Boots survived the small acid test with flying colors (autumn colors perhaps) -- ready for real action. What was not ready for real action was my brother's sleeping back. He was freezing during the night in the tent in the sub zero temperatures of early September near Polar circle. Having tested the gear for Kilimanjaro, the final activity was to prepare my own physique. If the veins on my forehead were about to explode when ascending the pitiful Finnish canyons, I clearly needed some additional exercises beyond Karhunkierros before taking on 6 kilometer high monster of a mountain.
Lähettänyt koomikko klo 5:57 PM