Every self respecting geek is supposed to perform at least once in their lifetime a holy pilgrimage to the land of hobbits, elves and orcs. While at it, it wouldn’t be a bad idea to do some hiking as well. Our very own fellowship (retkue in Finnish) ventured through couple of designated hikes in New Zealand while trying to soak it all in from both north and south islands within two measly weeks back in January 2012.

New Zealand is probably the only place on my list of visited countries (45 and counting!) where I have had to declare my hiking boots on the embarkation card in the plane. There was no classic “have you been organizing a genocide lately” type of questions in the form, but they are actually diligently screening that no foreign organisms are threatening their fragile ecosystem. For example there are no wild snakes in the country at all. Therefore we needed to have our boots xrayed just in case there were little snake seeds hidden in the soles.

One does simply walk on top of Mount Doom


Tongariro Alpine Crossing is one of the most famous hikes in New Zealand. This tramping track is located in Tongariro National park in central part of North Island. The more common direction is going northward starting from Mangatepopo and heading to Ketetahi. This direction requires less climbing and perhaps feels slightly less crowded as most of the other hikers are going into same direction. We stayed in Chateau Tongariro Hotel, which provided very easy access to the start of the trail in the morning.

The full distance of the trek is 19,4 kilometers and there is an option for extra scrambling detour to the crater rim of Mount Ngauruhoe and back. This particular active volcano along with its neighbour Mount Ruapehu were cast in the role of Mount Doom in the Lord of the Rings trilogy.

The trek is truly otherworldly due to the volcanic terrain it passes through. There are solidified lava flows, active fumaroles exhausting steam and mineral coloured lakes throughout the day trip. I have considered this as one of the most enjoyable hikes ever. Perhaps there is just a tiny bit of Mordor-bonus though in the evaluation.

Next stop during our quest was in Abel Tasman national park, which is located in the north tip of the South Island. In this NP there is yet another popular hike called Abel Tasman Coast Track. In totality it is a 60 kilometer long multi day hike. Due to our approach of conquering the whole country in 2 weeks (so called juosten kustu or run while urinating style as per Finnish idiom) we decided to experience only 1 day part of the journey.

This remote path is relatively tricky to access and requires a boat trip either at the beginning or at the end. The path journeys into forests covered in endemic type of fern called silver tree fern and occasionally lands on a strikingly yellow sand coloured beaches. There are some sections along the path which are navigatable only during the low tide. Honorable mention goes out to seals (which we didn’t see during the hike itself, but in other parts of Abel Tasman NP).

Hike with a happy ending

The geek within was completely satisfied with a Lord of the Rings tour starting from the town of Twizel. The surrounding area was featured as the Pelennor fields in the final battle of the trilogy. The backdrop is against Ben Ohau mountain range to the west and further up north to famous Mount Cook or Aoraki in the original Māori language. 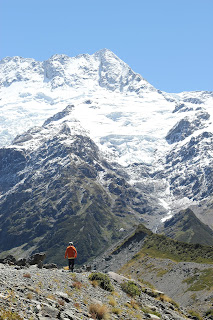 There are a number of hikes around the Mount Cook area. We decided to choose a walk from the tiny Mount Cook village to the nearby Hooker lake (*snicker* I don’t think I will ever grow up) at the base of Mountain. The Southern Alps are breathtakingly magnificent. The walk itself is leisurely but the valley in between the snow covered mountain peaks is simply marvelous. The Hooker (lake, valley and glacier) awaits weary travelers at the end of the hike.

It is being said that the Mackenzie Basin (the whole region south of Mount Cook) would be a spectacular place for stargazing. Apparently I would still have something to go back to New Zealand for. The NZ bucket list doesn’t stop at star gazing though: I wish I could go back to Milford Sound among other locations missed during this trip.


Within two weeks our fellowship managed to accomplish much in addition to the hikes mentioned.