Symmetrical Mount Fuji (富士山, Fujisan) is a distinctive image of Japan. The mountain has been prominent in many pictures and paintings of Japan ever since from 14th century. For example there is the famous series of 36 Views of Mount Fuji by Japanese woodblock print artist Hokusai. Given that one of my friends was (and is) living in Tokyo, I had a great opportunity to visit this iconic mountain myself back in August 2008.


Getting from Tokyo to Fuji area is relatively straight forward. There is train connection from Tokyo through Otsuki to the town of Kawakuchiko where we were staying for the duration. Kawakuchiko itself is a picturesque village on the shores of a lake by the same name -- one of the five big lakes around Mt Fuji. We had booked ourselves a room in one of the historical ryokan style guest houses, which offered outdoor hot spring pool or onsen as a royal reward waiting for us after the hike. From the town there is an easy bus connection to the starting station (2305 meters above sea level) of Yoshida trail, one of the four trails leading up to the summit. The mountain is divided into 10 stations and tenth being the summit.

We started our hike in the morning. Once we were under way there was a constant incoming traffic of other hikers. The masses of people had clearly summited the mountain very early in the morning to witness the sunrise. Seemingly they were mostly locals, who had wrapped themselves completely in layers of clothes. We on the other hand were dressed in t-shirts and shorts. The weather was close to 30 degrees centigrade in the valley below the mountain, but apparently it had been cold in the night when these people had started their hike likely from the 7th or 8th station where they had stayed overnight. We kept musing ourselves with people with woolen hats, sunglasses, scarfs around their heads -- with no patch of skin exposed.

There weren't so many people going uphill in the morning with us, but the descending traffic seemed never ending. Luckily there is a different route upwards and downwards. Visiting Fuji-san is very popular activity in Japan and given the limited window of opportunity between July to August you don't have to worry about being alone on the mountain. It has been estimated that there are 300 000 visitors each year, so you can do the math on the number of visitors per each day. Hiking outside the season is strongly discouraged due to possibly very severe weather conditions.

Each station has a set of basic facilities serving noodles and branding wooden walking sticks. And yes, I can confirm the stories being true that there is indeed a vending machine serving beer among other consumables at the rim of the volcano. The hike itself is not particularly demanding. The stations provide a nice set of interim targets and resting spots.

The ascent from the 5th station, where there the bus left us to the top of the mountain at 3776 meters took us about 5 hours. The circle around the rim of stratovolcano and stopping at the highest point near a weather station took us about an hour. The trotting down on the ash covered path took about 3 more hours. Thus our one day there and back again approach is clearly doable, but possibility of altitude sickness is potentially more probable with this approach than staying the night on the mountain. 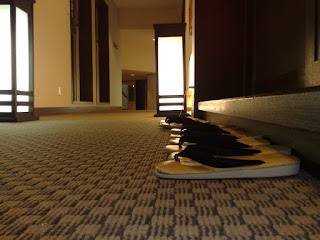 Towards the evening it started to dawn on us why the locals had covered themselves so well. Both me & my dad had suffered pretty bad sunburns on our face, arms and legs. Once we were safely back into the village, I tried unsuccessfully to find any after-sun lotion at a local pharmacy. My little Japanese phrase book had it's limitations. Our royal reward of onsen experience after 9 hour hike turned out to be a royal punishment as the sunburned skin did not particularly enjoy the steaming hot water. Amateur mistake clearly. However the traditional evening dinner of kaiseki cuisine was truly wonderful way to celebrate the achievement -- if we just could have been able to bend our stiff legs on the tatami underneath the low tables.
Lähettänyt koomikko klo 7:26 PM