Why would anyone living in Finland want to escape the first snow of winter in December to probably only place near equator where there is always snow? I had packed with me a collection of Ernest Hemingway's short stories, including the famous Snows of Kilimanjaro. I was determined to experience those snows myself.

Jungle makes way for moor land similar to scenery up in Lapland.  After the final fresh water source at 4000 meters, there is very limited amount of any fauna and also flora is quite non-existent on this windy desert. The final stretch from 5000 meter upwards is barren rock face of the volcano and covered by snow and glaciers.


Our hike, following the touristy Marangu route, included quite comfortable 10 kilometer day trips with about 1 kilometer ascent each day. We had additional acclimatization day staying at Horombo hut (3807 m). It was during that point when I & my companions started experiencing some discomfort due to altitude: loss of appetite and headache. Determination was also being challenged by the motivational scribblings on the hut walls left by previous hikers: "Turn around now while you still can" & "You will not die, but you will suffer a lot".

On the fourth day of the hike we crossed a desert called the Saddle between the two peaks of the mountain: Higher Kibo and steeper Mawenzi. The heat of the equator and the rain fall of the rain forest had been replaced by biting wind and particularly harsh sun shine. Shy Kibo had hidden beneath a layer of clouds for the most of our hike on the previous days, but while lumbering across the Saddle, our final goal was right in front of us the whole day.


On the final hut before the last stretch I was preparing for what would be the most demanding 18 hours in my life thus far. Few measly hours of nodding cannot really be considered sleeping, but at least the weariness of crossing the desert had vanished and I felt absolutely springy when preparing for the summiting at the dead of the night. Our mandatory guide, Aloyce, was explaining that there are two main reasons why the final ascent needs to take place in the dark: the frozen path is easier to travel than when the sand is loose but more importantly the incline of the cliff is so steep that many travelers would call it quits if they saw that in day light. The night sky opening above was a marvel on its own. I have never seen so many stars shine as brightly as I did on that night ascending Kibo.

The ascent started to slow down to a crawl and eventually crawl to continuous halting after each odd few steps. Our guide kept on chanting "pole, pole", which coincidentally in Finnish suggests to keep on pedaling ones bike. We had a good pace in the beginning, but our pit stop tactic started to take its toll and pretty much all of the fellow hikers kept on overtaking us -- the ones who had made it this far. When I was completely exhausted from never ending zigzagging and quite literally out of my breath, I started hearing voices right above me. We were just a final scramble away from Gillman's Point.

Apparently some might consider reaching Gillman's Point as summiting Kilimanjaro as it is located on the volcano rim, however the ultimate goal of Uhuru Peak is still some distance away. The overflowing feeling of the endorphin rush from reaching this key milestone accompanied with reluctant gnawing of a frozen candy bar gave enough power to continue the journey after just a moments rest.

There and back again (as quickly as possible) 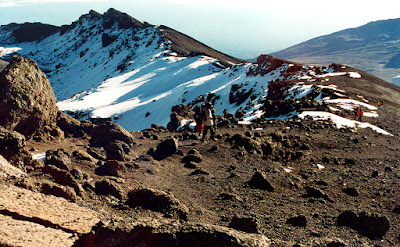 The Sun was rising over the Indian Ocean and giving us truly spectacular scenery everywhere we looked. On my left there were majestic glaciers which reflected the sun light in pale blue color and then beyond the unobstructed view far away into Tanzanian highlands. On my right hand side dropped the steep cliff into the dormant crater. The snow that I came seeking was squeaking beneath my boots (English language doesn't really do justice to different types of snow or the sound it makes when stepped upon. Isn't Finnish "narske" much closer to the sound itself than "squak", which is something that a mouse would say). The snows are still there as of today, however the ice cap is diminishing each year and it is expected that Kibo's white hair line has receded quite completely by 2040. Dragging my feet like a lazy teenager through the snow I started to be officially dizzy. Over 70 % of the hikers attempting to climb Kilimanjaro experience some symptoms of Acute Mountain Sickness (AMS) and apparently I made it into majority.

Eventually I slouched on top of a boulder. I had trouble walking straight, which is quite unnerving with serious potential of fatally tumbling either left or right when traversing the rim of the crater. Additionally I was completely out of juice and I needed to consider about the eventual way downwards as well. I was able to see Uhuru Peak relatively close by. So near, yet so far. My father, who was with me on this climb, was urging us to turn back. That seemed like the most sensible thing to do. Our guide mentioned that there was no more ascent, but just level walk for yet another 30 minutes or so. Finally, I made my mind: if I was to turn back here, I would regret it so bad afterwards. Thus one more time I mustered whatever strength there was in me and started taking one wobbly step at a time towards the goal. 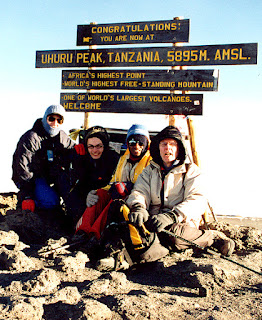 The actual summiting did not offer any additional dramatics as everybody from my travel company was feeling particularly sick. Right after taking the obligatory pictures, my brother crawled on all fours and offered his breakfast into the crater as a sacrifice to the volcano. It was clearly time for us to head back to more human friendly altitudes. Our guide half carried me across the rim and started to surf down on the loose sand and ash which had been now thawed by the Sun.

The walk back through the huts in reverse order was relaxingly uneventful. We kept offering motivational words to hikers we met on our way down. One exception was a group of senior citizens from Finland. We were lost at words when they asked us if their group of "old hags" (their words, not mine) will make it to the top. With the hindsight I guess I could have offered to them that Kilimanjaro did not kill us, but we did suffer a lot.